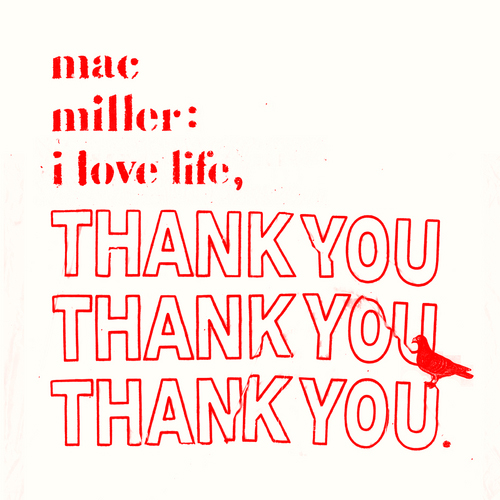 Mac Miller’s sixth mix tape, and second in 2011, I Love Life, Thank You, follows the familiar Mac Miller formula: girls, weed, alcohol and money. That’s not to say the Life is not a successful effort, as it boasts some of Miller’s most enjoyable work, but fans of the teenage Pittsburg rapper should not expect anything ground breaking.

Labeled by some as a poor man’s Wiz Khalifa, Miller burst on to the rap scene with K.I.D.S. in 2010. K.I.D.S. felt new and fresh and grabbed your attention. It featured “Senior Skip Day,” which possessed surprising pop radio playability for a song about smoking and skipping school. He followed with “Best Day Ever,” released earlier this year, which featured the huge YouTube hit “Donald Trump.”

At only 19, Miller appears to have a very bright future and he will be the first to let you know. His lyrics boast himself to be the best thing since sliced bread. Also if you didn’t know, he’s probably with your girl right now. If this attitude rubs you the wrong way, then Mac Miller probably isn’t for you.

Despite the inflated ego, Miller does know how to pick relaxed beats that work well with his laid-back flow. He is witty and does not take himself too seriously.

Aside from all these elements, Life features cameos from Talib Kweli and other rappers that keep the mix tape interesting through multiple listens. Above all else, listeners can take pleasure in Miller’s attitude toward life. He seems to be living a teenage male’s dream and his rhymes cleverly express his view on life.

As a collective unit, the mix tape lacks a major theme besides advertising the Mac Miller lifestyle, which should be enough for most casual listeners. But the brevity of Life, which clocks in at only 37 minutes, leaves something to be desired. Fans can treat Life as an appetizer to Miller’s first commercial album, Blue Slide Park, which drops Nov. 8. Miller will release the album under Rostrum Records, who ironically also signed Wiz Khalifa.

The joy of Life is the easy listening that it provides, rather than its artistic value. This is more of a supplement to Miller’s larger body of work.

It lacks the originality that K.I.D.S. provided, but has its impressive moments. In the age of iTunes, this mix tape will fit nicely in your collection and a few handpicked songs will flesh out your Mac Miller playlist.

I Love Life, Thank You is worth a listen or two but was definitely released free for a reason. Stay tuned for Blue Slide Park, which should prove to be the deciding factor as to whether or not Miller is here to stay.