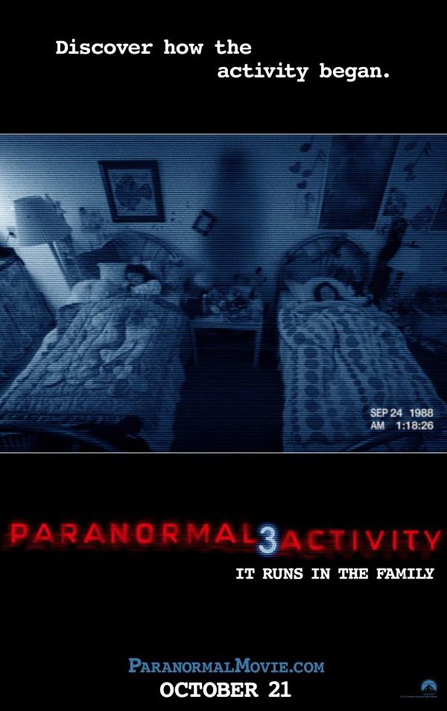 Paranormal Activity 3 had a record-breaking weekend with the best opening day of all time for a horror film.

A prequel to Paranormal Activity 1 and 2, this latest installment in the faux-documentary series focuses on the childhood of the unlucky pair of sisters, Katie and Kristi.

It reveals their mysterious past and the reason why they are haunted in the first place. While this film provides plenty of thrills and is definitely more exciting than the slower-paced Paranormal Activity 2, it leaves much to be desired in terms of story line and continuity.

The setup of this film is one we have come to recognize from the first two films: in over-eager husband/boyfriend wants to investigate spooky sounds and occurrences, starts setting up cameras obsessively and ends up capturing a lot more than he bargained for. Lauren Bittner plays Julie, the young girls’ mother, and Christopher Nicholas Smith plays Dennis, her boyfriend who is determined to find out what is going on.

Since these tapes were supposedly filmed in 1988, the audience is treated to a few authentic grainy images at first, complete with pixelated dates in the corner. However, once the story starts, it somehow immediately shifts back to high-quality digital imaging, thankfully.

The younger versions of the ill-fated pair of sisters Katie and Kristi are played by Chloe Csengery and Jessica Tyler Brown respectively, two adorable little girls who become creepier and creepier as the movie progresses.

It all starts with Kristi and her imaginary friend Toby. She insists on talking to him at all times, and Julie indulges her imagination and refuses to listen to Dennis when he finds it disturbing, insisting that this type of behavior is normal for children. However, Dennis starts noticing that strange things have been happening around the house since Toby appeared, and already being a camera lover, he decides to set up some cameras to investigate.

Spurred on by some creepy visuals, Dennis enlists his friend Randy, played by Dustin Ingram, to help him review the footage and set up more cameras. How they are able to review 24 hours of footage everyday with just the two of them is a mystery, but somehow they manage. As in the other two films, the camera only seems to make the demon angrier as the strange occurrences continue to happen and increase at an alarming rate.

Soon things start to get so bad that you wonder why the adults aren’t doing anything to remove the girls from the situation, as they are dragged all over their bedroom like dolls and hoisted up by their hair. Julie continues to be in denial of any supernatural happenings, and it gets a bit frustrating because presumably Dennis has all these incidences on camera and could easily show her to convince her. Finally, they retreat to Grandma’s house, but it turns out to be anything but the safe haven they were hoping for.

This film is definitely as scary as Paranormal Activity 1 and 2; there’s just something about the faux-documentary style of filming a horror film that adds a level of realism and authenticity to a story. Every creepy sound or object movement is ten times creepier because it looks so realistic, as if it could be your own house haunted by an invisible demon.

Directors Ariel Schulman and Henry Joost did get a little carried away at some points though, especially with several scenes where the audience was scared by the characters themselves seeking to play a practical joke on other characters. Normally every horror movie has at least one of these types of scenes, but this film had a couple, including one with a babysitter that definitely felt a little played out.

The origin of these tapes was cleverly explained, although as they continue to churn out sequels it is inevitable that the found footage premise is going to get old. It was already a stretch that these tapes just happened to conveniently exist, and with the next one suspension of disbelief will be stretched even further.

Additionally, this film had some undeniable continuity errors that may or may not have been intentional. In Paranormal Activity, Katie made it sound as if it was her who was haunted by the demon the most as a child. However, in this film Kristi is the one who spends the most time interacting with Toby, or the demon. Katie also mentioned that their house burned down as a child and it seemed like a pretty pivotal moment, however, there is no fire in this film; perhaps that will be in the next one.

Overall, this film was a successful addition to the Paranormal Activity series, with plenty of scares to keep audiences coming back for more. Those seeking more clarity on the backstory may be disappointed, as the film’s ending is ambiguous to say the least.