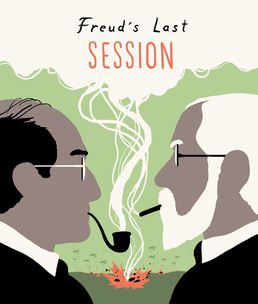 What words would have been exchanged if two of the most celebrated minds of the 21st century, psychoanalyst Sigmund Freud and author C.S. Lewis, had ever met? Mark St. Germain’s response was Freud’s Last Session, the longest running Off-Broadway show and the Theatrical Outfit’s latest production.

It’s important to note that Freud was an atheist and Lewis an atheist turned Roman Catholic as these conflicting ideals lead to an exchange that explores a number of thought-provoking topics, ranging from love and sex to the existence of God and the meaning of life.

It manages to remain witty and intelligent while keeping our interest; perhaps most importantly, the situation itself makes sense.

Be it due to exemplary screenwriting, directing or both, the play unfolds in such a manner that we never feel the need to question the authenticity of its events – in fact, it makes it easy to forget that it is fiction.

Both of the cast members’ portrayals are convincing, David de Vries is nearly unrecognizable as an 83-year-old Freud dying of oral cancer and Andrew Benator as a young Lewis, calm yet full of passion.

However, much like Lewis is at times dwarfed by Freud’s experience, Benator is at times overshadowed by de Vries’. He gives meaning to his every move as if constantly reminding himself it might be his last, and the resulting performance is nothing short of flawless.

Constantly teetering back and forth between light humor and heavy discussion, albeit more to the serious side, we are interrupted by well-timed radio transmissions before any moment could be considered comical or dark.

However, St. Germain’s most impressive feat is maintaining neutrality as there is no clear winner by the end of the play, and any attempt to crown one would defeat the point.

The set is stunning and is designed by Isabel & Moriah Curley-Clay. The entire play takes place in Freud’s office, littered with artifacts of mostly Greek, Roman and Egyptian origin as a testament to Freud’s encyclopedic knowledge of various religions.

The furniture fits the feel of the room, masking the mess of rugs beneath it, and the set as a whole is complemented by a surreal backdrop.

The play boils down to a one-act featuring two characters in what is essentially an 80 minutes conversation, so any attempt at a plot summary wouldn’t do it justice; while that would sound boring to some, in this case, the result is great theater.

In line with the Theatrical Outfit’s mantra, this is a “story that stirs the soul.” Freud’s Last Session is definitely worth seeing and serves as a nice change of pace from the 10-second sound-bites that most of us have grown used to.