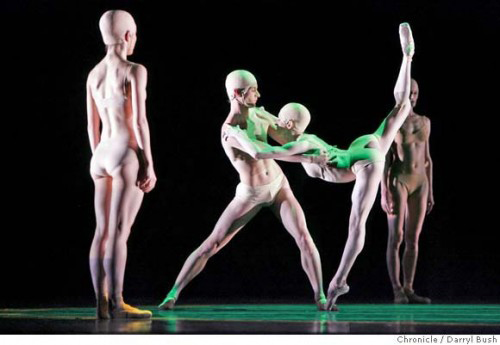 The Atlanta Ballet’s first performance of the season will leave you in awe.

Maybe it’ll be the musical score that encompasses both classical and techno tunes with a scientifically based voice-over. Perhaps the rather barren costumes that showcase the raw human body, paired with the astonishing fluidity in the movements of the dancers, will keep you on your toes, anxious for each subsequent part. Or it may be the message of humanity, or a possible lack thereof, that the performance conveys. Regardless, Eden|Eden, a contemporary ballet performance, coalesces these elements into an edgy, avant garde work by the philosophically driven choreographer Wayne McGregor.

At first, the change from The Four Seasons by Vivaldi, which is performed in the first half of the show, to a portrayal of Steve Reich’s seemingly unharmonious combination of robotic melodies with classical tunes seems a bit drastic and hard to digest. The unconventional ballet, however, starts taking form as the music sets in and the first dancer begins to dazzle the audience with graceful movements that are paradoxically mixed with automaton motions near the joints. It is from this very moment that the idea of humanity versus machinery is impregnated into audience’s minds.

As the dance continues, the voice-overs will begin to zero-in on one idea in cloning. It is this very idea that is the centerpiece of the dance and the music, and the resulting themes of whether this act of cloning is ethical or not, and in an extrapolation, whether everyone is just a biological organism designed to survive or an individual with a soul. Throughout the play, however, McGregor maintains equilibrium between the two perspectives – the latter of the two by donning clothes on the dancers and introducing greater flexibility in the dances, and the former by maintaining the structure of the dance with its crisp movements. By doing this, he forces the audience to form its own opinion about the question posed rather than directing it to one answer.

The dancers alone are a thrill to watch on the stage. Their unique movements, which involve arms and legs seeming to pop out of place, hips rotating exaggeratedly, and backs swerving with great fluidity, render the dance modern, but its combination taken with an unbelievable grace maintains the ballet aspect as well. Tara Lee, the first and last performer on stage for the dance, has remarkable skill that manages to exemplify these movements, with or without a partner, to absolute perfection.

In retrospect, the performance was at the very least captivating from the perplexing interplay of music, dance, and costume.

For veterans of ballet dances, the show offers an fascinating view of humanity. On the other hand, newly-made aficionados of the art will revere the overall quality of the dance. Eden|Eden premieres this Friday by the Atlanta Ballet in Cobb Energy Performing Arts Center.