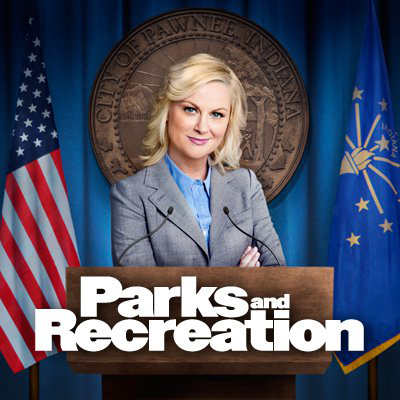 Fans of NBC’s Parks and Recreation know and love the comedy series for its weekly dose of local-government mayhem, small-town tomfoolery and uplifting theme music. Amy Poehler’s Leslie Knope and her crew of bureaucrat cronies burned brightly as ever on Sept. 22’s season four premiere, almost as though they’d only returned from a long weekend off, and the results are both thematically promising and comically lucrative.

Staff writers turn a promising page as they tie loose ends left over from season three—yes, Leslie is running for city council of Pawnee—and introduce an all-new barrage of political, financial and interpersonal hurdles for the main characters to take on. Episode 401 presents Leslie’s internal tug-of-war between her dream of running for public office and her scandal-bait relationship with government official Ben Wyatt (Adam Scott), while mustached libertarian Ron Swanson (Nick Offerman) anticipates a harrowing face-off with clinical she-demon and ex-wife, “Tammy I.” The second episode also raises the issue of Tom Haverford’s (Aziz Ansari) ballsy, though fruitless, business venture, Entertainment 720, which teeters on the brink of financial disaster.

The opening episodes of season four set the stage for the full realization of Deputy Knope’s transition from a ditzy, one-dimensional spinoff of The Office’s Michael Scott to a beacon of feminine altruism in a town whose male-dominated government is plagued with deplorable sex scandals, misuse of tax revenue and general disinterest in the quality of its citizens’ lives. In addition, writers Troy Miller and Norm Hiscock conduct an exemplary job of developing new and ongoing relationships between the series’ characters: As April and Andy settle into their charming, albeit slipshod, version of married adult life, the audience also comes to know and understand the enigmatic Ron Swanson on a more profound level as he succumbs to and breaks free from the simultaneously motherly and wicked spell of Tammy I.

While the masterminds behind the series and their characters strive for new and once-unfathomable heights, laughs and gags are not scarce. Offerman’s portrayal of Ron Swanson, whose coarse dialogue would likely fall flat from the mouth of any other esteemed actor, continues to charm audiences with his deadpan demeanor. When Ron and Leslie duck their troubles in a secluded cabin and decide between an afternoon of hunting, fishing or drinking, Leslie admits, “I’d really love to shoot a gun right now,” to which Ron replies, “Fishing, it is.”

Patricia Clarkson, who plays the delectably callous Tammy I, also dominates the set as she lays claim to Ron’s financial assets and personal freedoms with the force of a corporate CEO, private-school headmaster and nun wrapped into a formidable package. Her transformation of Mr. Swanson into a clean-shaven, “neutered wimp” who exclaims, “Cool beans!” serves as yet another source of unmitigated hilarity and absurdity.

Season four introduces a number of novel and exciting ambitions for the leading characters and their interpersonal relationships; however, the intermingling of Leslie’s bid for candidacy, Ron’s conflicts with previous wives, Tom’s dream of owning his own nightclub and Ann Perkins’ desire for more meaningful relationships that characterizes each episode run the risk of becoming a tiresome juggling act.

The series’ writers also beat a dead horse as they endeavor to resurrect humor from the somewhat stale interplay between Ann and her perfectionist ex-boyfriend, Chris.

As the creative team behind The Office jumps shark after shark in a futile attempt to dodge the drain it circles, Parks and Recreation stands as a genuine and inviting slice of Thursday-night comedy that offers endearing and well-developed characters and manages to entertain without resorting to overblown marriages, pregnancies or drug busts.