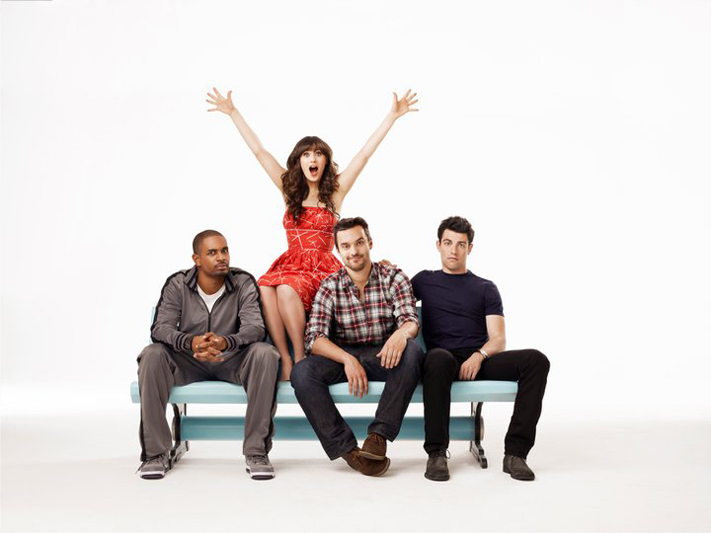 It is apparent from the moment New Girl begins that its main character was made for Zoey Deschanel. With the inclusion of her unique sense of humor through goofy and creative songs about the peculiar situations her character faces and her sporadic witty comments, the show promises to be quite a hit.

Deschanel’s character, Jess, kicks off the premiere with her comical and dramatic recount of the discovery of her boyfriend cheating. When she returns to the present it is revealed that she is being interviewed by three unassuming guys who are looking for a new roommate for their apartment.

Jess may not be the most likely choice as she is quite hurt and clueless, but once she reveals that her best friend is a model and is always bringing her other model friends around the guys reconsider and it is settled. Jess is the new girl.

In the pilot episode Jess moves into the apartment and begins her period of post-breakup depression where she watches Dirty Dancing on a loop, much to her new roommates’ dismay.  Once they realize they can only bear to see her with brokenhearted attitude for so long, they devise a plan to take her out in hopes of her landing a date. Jess is thrilled with the prospect of getting over her ex-boyfriend, but the boys quickly realize that she needs a lot more help then they thought. After quite a bit of preparation, singing and comical advice, Jess heads out with her roommates, determined to get a rebound.

The characters go to a bar and, after a terrible but humorous first attempt, Jess uses the advice her roommates gave her and gets a date, much to her and her roommates’ surprise and excitement. It is a great moment for the characters until Jess starts dancing, complete with her flashing her “granny panties” for everyone to see, in the middle of the bar. Jess is once again assisted with getting ready since her traumatic breakup left her scattered and confused about what to do, but she cleans up and heads out with high spirits.

Meanwhile, the guys go to a “Wild Wild West” party where they see Jess’ date and immediately are faced with the decision of staying at the party or leaving to save Jess. The guys ultimately feel sorry for their sweet and innocent new roommate and head over to prevent her from facing any more upset together. Jess realizes what has happened once her roommates appear and she begins to cry, but the characters successfully cheer her up by performing an amusing rendition of “(I’ve Had) The Time of My Life” in the middle of the restaurant.

The premiere concludes with the cast in their apartment watching Dirty Dancing together, a cute and goofy ending to what promises to be a great rest of the season.

The second episode of New Girl reintroduces Jess’ quirky humor and her roommates’ comical personas, but ultimately falls just a little short of the first episode. The episode centers around Jess standing up to her ex-boyfriend to get her possessions back from his house. At first she is settled on not returning as she knows it will only upset her, but once she breaks her roommates’ TV they basically force her to make a trip.

Jess meets up with her ex-boyfriend, Spencer, in the park where it is revealed that he is completely unaware of how odd their situation is to her. Their meeting leads to Spencer and his new bike-loving girlfriend getting a ride to the airport, an attempt to steal a TV from a pawn shop, and an even more distraught Jess.

Once she returns to the apartment with no TV in hand, Nick decides to inspire Jess to stand up to Spencer, as he is her “kryptonite.” Jess gets angry and riled up before throwing in the catch: they are all going to Spencer’s house with her. The crew packs into Jess’ car and drives over to where he lives, which Jess drives by at least five times before building up the courage to stop.

She walks to the door and Spencer hugs her while the carload shake their heads in disapproval. It seems as though their meeting is going to be just as big of a disaster as the first until Jess notices that Spencer has not been watering their plants and she goes a little crazy, throwing the plant on the ground and storming into his house to grab all of her things. Jess makes her grand exit from Spencer’s life with a soliloquy about how her life is much better without him and how her new roommates are the best thing that has happened to her.

The show concludes with the group sitting on the couch once again trying to figure out what to watch on Jess’ mangled TV when she provides an array of chick flicks, effectively causing the guys to leave, except for one who eagerly returns a second later.

Overall, New Girl has the potential to be one of the best comedies on TV thanks to its lovable cast and humorous approach to what could potentially be an emotional and upsetting situation, definitely making it a show to watch.