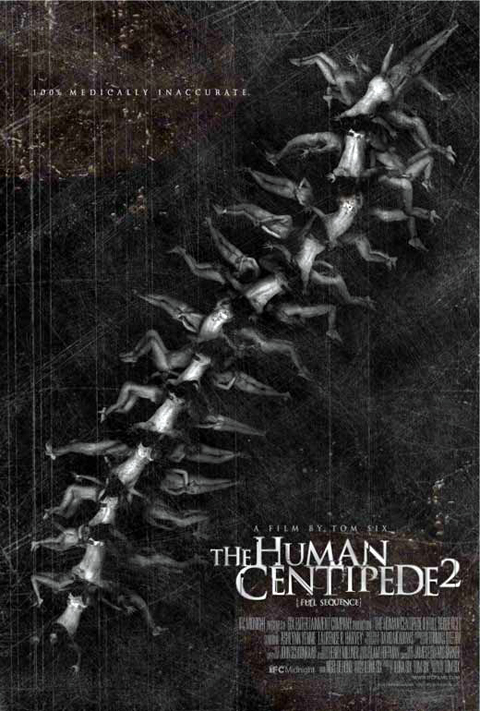 Two weeks ago at Fantastic Fest, I had the pleasure of previewing The Human Centipede 2 (Full Sequence). Today being its official theatrical release, it seemed fitting to revisit it. That’s right: a follow-up to the movie whose very mention spurs a gag reflex. While its critical merit is debatable to say the least, there’s no denying the viral popularity of Tom Six’s 2009 film. However, Centipede 2 manages to make your innards curl in ways you simply did not know were possible. The few redeeming qualities of The Human Centipede (First Sequence) are abandoned entirely for the sequel, and in doing so Six succeeds in making the most grotesque and shocking film possible.

The film takes a meta-narrative approach, picking up from the credits of the first Centipede and zooming out to reveal Martin (Laurence R. Harvey), a parking garage security guard who we can safely assume has viewed this film dozens of times over. We are shown in a flashback that he was abused by his father as a child, only to be continually torn down by his overbearing mother as an adult, which supposedly justifies the mess of a movie that follows. Hoping to recreate the human centipede from his favorite film, Martin rents an all-too-convenient warehouse and begins abducting seemingly random people to make his twelve-part masterpiece. His ambition far overleaps Dr. Heiter’s of the original Centipede, made disgustingly apparent by Martin’s complete lack of medical precision.

While the good doctor had a certain finesse to his procedures, Martin’s are conducted with rusty tools, a staple gun and some good old-fashioned duct tape. From start to finish, we find ourselves in shock; not because we can’t predict what happens next, but because our better judgment protests “He wouldn’t”—until he does, and without even the slightest trace of hesitation or remorse.

It seems quite possible that Six made this film in response to the critical reception of his first endeavor. I imagine him quipping  “Is that a challenge?” to reviews that claimed Centipede as amoral and disgusting. This time around he refused to hold back, drowning his fans with what they claim to have craved. No detail is left to the imagination, no image is too vivid to be portrayed on film, and no thought is too horrifying to be realized. In fact, Centipede 2 has already been banned in the UK on the grounds that its content was too extreme to be classified; chances are, you’ll have trouble finding it in theaters around the U.S., too.

That’s not to say that this movie is completely without merit. It is meant to disturb its audience, and it does so brilliantly. Between hammered teeth and severed tendons, you’ll learn to guffaw at the gore of Chanwook and Tarantino alike. The metanarrative coupled with the black and white filter allows for optimal discomfort. All the while, Martin’s lack of any dialogue whatsoever makes Harvey’s performance exceptionally chilling. The fact of the matter is that this film is not meant to be enjoyed but appreciated, and even that can be too difficult to stomach. To describe Centipede 2 as dark would be an understatement; it is best described as pitch black. I would suggest this film to no one but the most die-hard of horror film fans if for no other reason than to be able to say “Yes, I saw it, but most days I wish I hadn’t.”