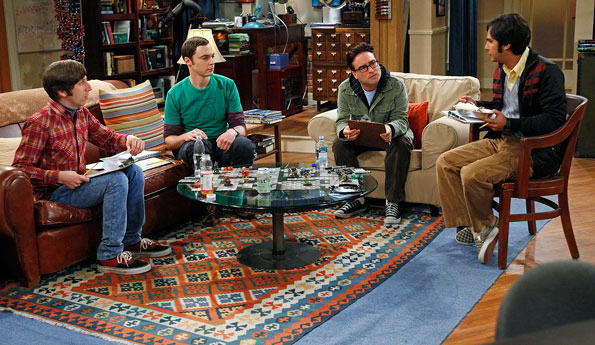 The Big Bang Theory has returned with its newest season, and it is just as good as ever with Raj’s Indian accent, Howard’s failures in his love life, Leonard’s troubles with Penny and Sheldon’s ever-obnoxious attitude. The story resumes with Priya, Leonard’s girlfriend, moving back to India for further studies, leaving Leonard alone and disheartened in Pasadena, Calif.

The Big Bang Theory has earned its fame for complicated, scientific names of episodes, and this season opens with “The Skank Reflex Analysis.” Producers Chuck Lorre and Bill Prady have cleverly decided to maximize the usage of their biggest advantage as an audience-entertainer: the obnoxious character, Sheldon Cooper. The episode begins with Sheldon pondering over a possible relationship between Raj and Penny, and Sheldon continues to hilariously annoy Leonard with his ingenious pick-up lines.

We see a definite change in the relationship between Raj and Leonard that is only worsened by Sheldon’s insufferable attitude and ignorance to sensitivity for the situation. Howard is also not on the best of terms with Raj after he learns that Raj has been writing poems about Bernadette, Howard’s fiancée. The general bad mood of the characters is wonderfully lightened by Sheldon’s intermittent remarks that are guaranteed to make you laugh out loud.

The episode goes on to reveal, much to Raj’s dismay, that Penny deeply regrets her one-night-stand with him and does not want a serious relationship.  We also see some brilliant acting by the innocent Bernadette, who displays her angry side toward Raj when she hears of his love poems about her.

The sarcasm in the dialogue is alive and well and Sheldon continues to struggle to distinguish between serious talk and sarcasm—an attribute that viewers truly enjoy. In my opinion, his confusion is what brings the show to the stage and makes the audience sit up and watch. The title of the episode, however, is derived from a dialogue by Amy Ferrah Fowler, Sheldon’s “girlfriend.” Amy explains to Penny how microbiologists describe Penny’s promiscuous behavior as “The Skank Reflex.” A fact that distinguishes this episode from others is a potential lack of legitimately scientific jokes or remarks. The humor is more in Sheldon’s ignorance or in general punch-lines.

Episode two is entitled “The Infestation Hypothesis” and continues the dilemma between the protagonists. Leonard has a Skype date with his girlfriend Priya who is now in Mumbai, India; and Sheldon cannot help but be his usual self and poke into Leonard’s affairs yet again. The episode is centered around Sheldon and Leonard, with Sheldon showing his obsessive compulsive side when Penny takes a chair home from the side of the road.

He believes that it is infested with lice and germs and tries to manipulate Amy Ferrah Fowler to talk Penny out of keeping the chair when he does not succeed in doing so. The humor is further heightened when it is revealed at the end of the episode that there are, in fact, rats in the chair. Meanwhile, Leonard tries even harder to spice up his long-distance relationship with Priya.

In a nutshell, Season Five of The Big Bang Theory seems to be a giant success so far. The characters have, if anything, improved their dialogue delivery and acting. Johnny Galecki, who plays Leonard has sharpened his skills significantly and makes a substantial change to the show. Jim Parsons, playing the role of Sheldon, is just as impeccable as ever, and Raj, Howard and Penny continue to entertain on the sidelines.

The new season of The Big Bang Theory is a must-watch for both math and science and comedy lovers.