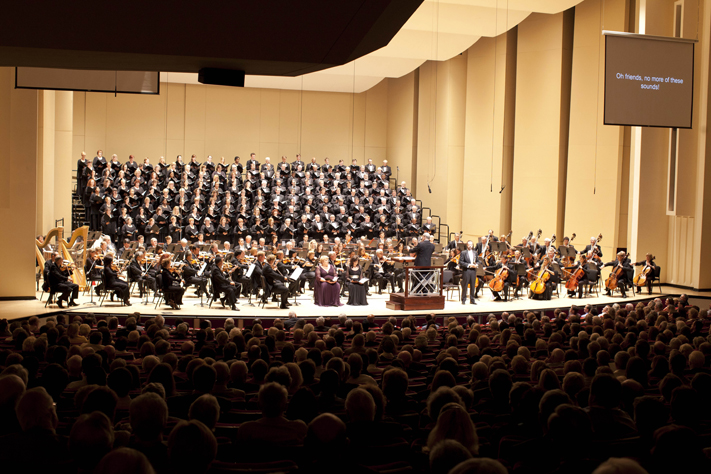 While the musical selections were not exactly ground breaking—sticking to classics familiar to even the non-musical—they were stunning nonetheless, proving why they are classics.

Under the direction of conductor Robert Spano and the leadership of concertmaster David Coucheron, the ASO swept through selections from Wagner’s “Der Ring des Nibelugen (The Ring of the Nibelung).” These included the epic “The Ride of the Valkyries” and the elegiac “Immolation Scene” from “Götterdämmerung (The Twilight of the Gods)”—an opera. The latter featured the vocals of soprano Christine Brewer, who effectively commanded the stage and the role.

After the intermission, the symphony performed Beethoven’s Symphony No. 9 in D minor, one of his most famous and most impressive works. The orchestra played the first two movements beautifully, highlighting the various themes in between the sections. The third movement, the Adagio, slowed the pace considerably, the fragile themes blurring together, effectively creating tension between the winds and lower strings in preparation for the finale.

At the beginning of the fourth movement, a discussion is conducted, as themes are brought back by the winds and summarily rejected by the cellos and basses. Eventually a melody is chosen, and that theme is the immortal “Ode to Joy.”

This “Ode to Joy,” however, is not of fourth-graders learning to play instruments or tinkering on a piano, but “Ode to Joy” as it is meant to be heard—with a full orchestra, soloists and chorale all working together towards a majestic culmination of the symphony. The ASO more than effectively captures this, leaving a stark reminder that they are a world-class orchestra.

With so many things to do in Atlanta, it is easy for Tech students to forget about or write off the symphony as stuffy and expensive. This opening night, however, proves the enduring thrill of classical music. Even for the non-musical, such a performance is undeniably impressive.

However, great music alone does not draw and keep crowds. The ASO recognizes this by putting on a full show. The opening “Star-Spangled Banner” feels almost impromptu as the audience is physically and sonically surrounded by the chorus.  Programs provided also contain a great deal of background and history for the pieces played, along with a brief musical analysis. With just a little reading, even the most unknowledgeable listener can suddenly feel like an expert and have at least a basic understanding of the nuances in the music that becomes more like a dialogue without words.

As the pieces with words were in German, and as such, translations were provided on screens and in the programs.  The programs also contain brief plot outlines for the performance, allowing the listener to get lost in the tragedy of the heroine Brünnehilde as she chooses to throw herself into the flames of her husband’s funeral pyre. Suddenly the music is no longer just music, but stories and conversations anyone can understand and enjoy.

Cost-conscious students also need not worry as the ASO is providing amazing deals for students.

The Woodruff Arts Center not only gives Tech students tickets to the symphony, but also plays at the Alliance Theatre and allows access to the High Museum of Art, along with many other benefits.

The symphony has an exciting season planned. Highlights for the upcoming weekend’s performance of Tchaikovsky by world-class violinist Joshua Bell and Rachmoninov’s “The Bells” from Oct. 27 to 29, once again featuring a full chorus.

For those less classically inclined, there are other options like Rockapella (Oct. 14 to 15) and A Storybook Halloween (Oct. 30).

As the symphony strives to market itself towards a younger market, it will soon feature will be a “happy hour” before concerts for the younger generation.

Now is the time for students to try it out.  If the concerts continue to be anything like their opening night, visitors are sure to be pleased.