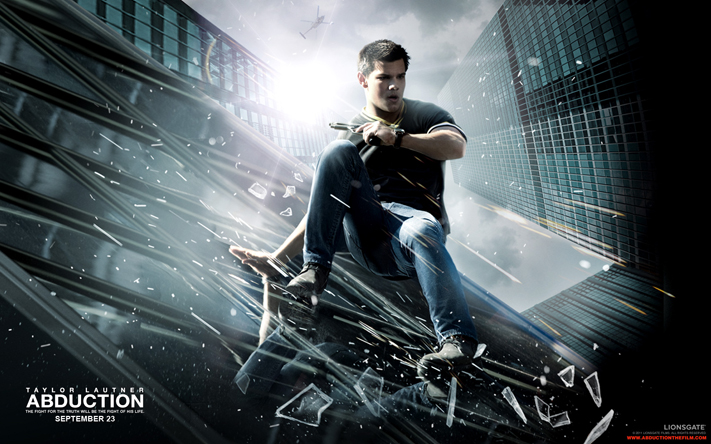 Taylor Lautner of Twilight fame attempted to break out on his own this past weekend with the action-thriller Abduction. Unfortunately, this film was not the best vehicle with whichto establish him as leading man material and may have even set him back. While mildly entertaining, weak characters and a contrived plot make this film one to skip.

Directed by John Singleton, Abduction built its premise around the shocking idea that you could one day accidentally discover that your parents are not your biological parents, and that you have been abducted. Unfortunately, the title is completely misleading. There is no abduction in this film, and the story is disappointing to say the least.

Lautner plays Nathan, a regular high school kid who likes to party with his friends but struggles to control his rage—very reminiscent of Jacob from Twilight. Because of his rage issues and some disturbing, reoccurring dreams, he has routine therapy sessions with Dr. Bennett, played by Sigourney Weaver, who must have just been a cameo for publicity because her character was completely superfluous.

Nathan’s parents are portrayed by Jason Isaacs from the Harry Potter series and Maria Bello. The film does not try to hide the fact that these are not his real parents, understandable given that the trailers all openly portray this fact. However, producers would have tried a little harder to make it more realistic so that the audience could actually believe that Nathan was unaware of his real identity his whole life.

Lily Collins plays Karen, Nathan’s longtime crush whom he was too shy to ever approach before. They are randomly paired for a school assignment, and naturally, the sparks start flying. She inadvertently guides him to a website that shows pictures of missing children as they would appear aged, where he is devastated to see a photograph that looks almost exactly like him. His worst fears are confirmed when he finds the same shirt he is wearing in the missing persons photo hidden in his basement, complete with the same dark stain.

Nathan attempts to contact the website to learn more about his past, unintentionally alerting a group of deadly Russian terrorists, who could keep his photograph there as a trap, wanting to use him as leverage to recover something from his real father, an international rogue spy.

Once they have his location, they quickly descend on the house, killing his fake parents and forcing Nathan to go on the run. To no one’s great surprise, Karen insists on going with him. The pair is also hunted by the CIA.

The action sequences are done well enough to have a successful action film there has to be a coherent and gratifying plot. That is where this film falls short. The plot is wholly and completely contrived, existing only to showcase Lautner as an action hero.

Besides being completely predictable, numerous plot holes  make it painfully obvious that not much thought went into the script. The audience never fully understands why Nathan was put in a protection program, or what happened to his mother, or why he can never see his father.

None of this is helped by the fact that all the characters are completely one-dimensional and utilitarian.

There are allusions to Nathan and Karen being childhood friends, but is never expanded on, which might have helped make their love story more meaningful. The film is too focused on the action to develop the characters much at all.

Twilight fans will probably enjoy this film, but that’s about it.