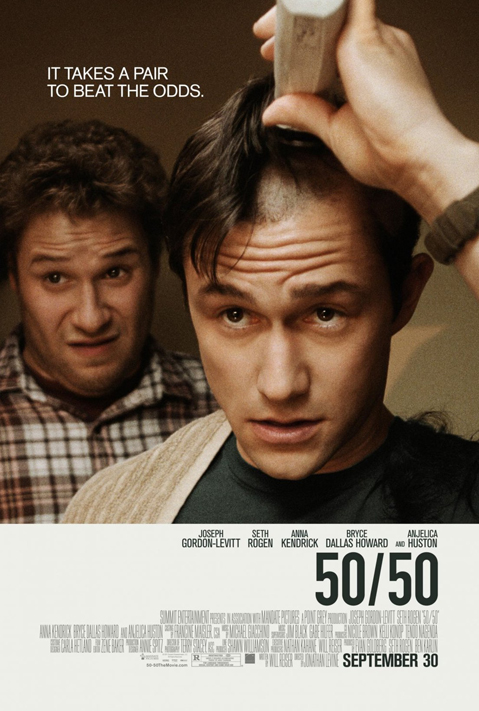 Despite the presence of comedy actors and writers, 50/50 is a movie about cancer that will likely pull on the heartstrings of even the most jaded viewers.

Rather than using this disease as a selling point or generic tear-jerker, however, the main idea here is the humor and changes that come with the hardships of surviving cancer, with no small amount of Judd Apatow-brand comedy tossed in. The story is based on the experience of comedy writer Will Reiser, who was diagnosed with the disease and subsequently went on to survive and write about this peculiar moment in his life.

The story centers around Adam Lerner (Joseph Gordon-Levitt), a plucky, neurotic sort of fellow who seems content to live with many of the punches that life throws at him.

Adam is supported by his closest, if not sometimes annoying, friend Kyle (Seth Rogen) and his decidedly wishy-washy girlfriend (Bryce Dallas Howard).

Kyle and Adam spend their time working for a Seattle radio station while dealing with little else but their everyday lives and some tedious work.

The bombshell in the story drops when Adam receives a startling diagnosis during a visit to the doctor, revealed none too gently either.

The suddenness and impact of the news elicit such disbelief that the rest of his visit is a blur, leaving him with the incredibly awkward task of informing everyone around him.

Much of the plot from here on revolves around how everyone in Adam’s life responds to his illness and his interactions with them, though there are a few introspective moments that follow.

From here on a few new characters are introduced, such as his overbearing mother (Anjelica Huston) who already has to play caretaker for her Alzheimer’s-afflicted husband, a pair of older, wise-cracking patients (Phillip Baker Hall and Matt Frewer) who receive chemotherapy along with Adam and the particularly inexperienced and humorously messy therapist (Anna Kendrick) assigned to him.

The medical marijuana jokes are expected, but are still delivered in an unexpectedly humorous manner.

This unexpected humor applies to much of the comedy throughout the film, as the jokes come across naturally and remain entertaining throughout, with Rogen providing a great deal of his trademark personality.

If anything, Rogen plays his character almost too well and very similarly to previous roles he has taken on, but there does turn out to be a good reason for him to nearly overplay himself in this manner.

Gordon-Levitt’s performance starts off entirely sympathetic, given his timid, neurotic nature, but becomes a convincingly conflicted character as he deals with his family and friends, the rigors of chemotherapy and his increasingly depressed sense of impending doom despite the optimistic outlooks around him.

There is a real sense of relief when he begins to try and direct his life the way he wants it to go, but at some point, he almost loses sympathy when he lashes out at people around him due to conflicting notions on his life.

Neither the comedic or dramatic aspects of this particular example of “dramedy” are over-the-top and manage to effectively evoke laughter and tears in equal measure.

Screenwriter Will Reiser collaborated with Rogen to produce The Ali G Show when Reiser was diagnosed with cancer. However, Reiser made it clear that the character Adam was most representative of his experience.

Rogen jokingly pointed out that his performance as Kyle was, hopefully, more overblown than how he had been when he was younger.

“We were comedy writers. We never talked about emotions ever. And when he got sick, we just realized our priority wasn’t relating to one another, it was about trying to get a license for medical marijuana. But when Will got better, we realized that there was no movie that felt like what our experience was. It was scary, but it was also really funny sometimes,” Rogen said on the topic of launching this personal topic onto the big screen.

Though the idea had been proposed in jest during Reiser’s treatment, Reiser continued developing a prototypical script when Evan Goldberg and Seth Rogen urged him to take another shot at the idea.

While there are moments during the movie where Rogen’s outbursts of vulgarity will drive the audience into laughter, there are also poignant moments that make it hard for one’s eyes to stay dry even when one is expecting the emotion.

The combination of the interesting cinematography, well-thought writing and captivating performances makes this a movie that somehow crosses the lines into being a stoner-buddy flick and melodramatic exploitation, but in a way that pleases audiences from both ends of the emotional spectrum.