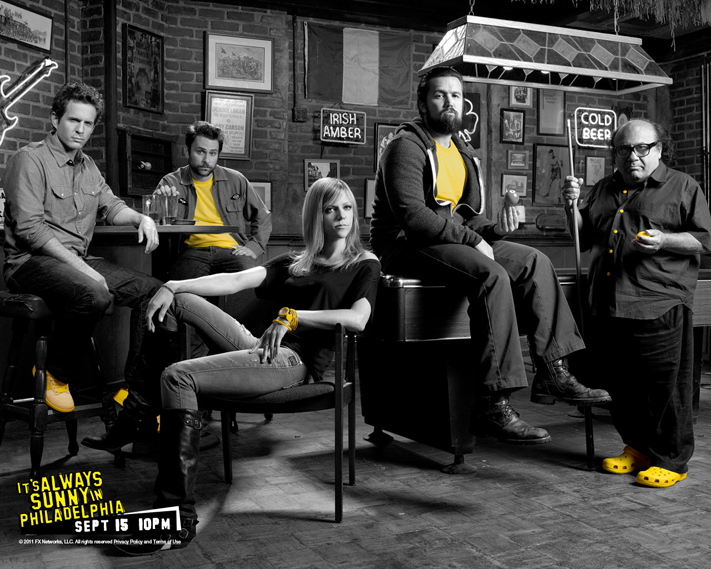 It’s Always Sunny in Philadelphia, a sitcom specializing in twisted and usually uproarious humor, returned to FX for the premiere of its seventh season on Thursday, Sept. 15. Possessing arguably some of the funniest moments on TV over the past six years, Sunny seems to have found a formula that works.

Proclaimed by fans as “Seinfeld on crack,” viewers have grown fond of the gang over the years. Some probably even want to party at Patty’s Pub, the Irish bar that Charlie, Dennis, Mac and Dee run. Heck, hanging out with Frank, played by Danny DeVito, for an afternoon could produce stories to last a lifetime. Just thinking about Charlie as a gasoline salesmen or the dance till you drop competition brings smiles to fans’ faces.

It’s an understatement to say that the bar has been set high for season seven. The premiere registered only a blip on the radar of laughs. Riddled by far too many commercials, the episode opened interestingly enough: Frank is dating a prostitute.

Unfortunately, the plot and comedy did not go far from there. The writers, perhaps aware of their own shortcomings, titled the sow premiere “Frank’s Pretty Woman.”

Sunny had all its usual ingredients for a knock out episode: drugs, alcohol and Charlie wallowing in his own filth. Oh yeah, Mac is really fat too. Yet the jokes seemed to be a step behind. Frank plans on proposing to his prostitute girlfriend Roxy, but Charlie advises against it. The two end up driving a limo with an unsuspecting woman riding along as Charlie’s date. She thinks she’s going out with a millionaire.

This type of trickery is nothing new for Sunny, however, when Charlie begins spewing vomit all over himself and the passenger, one couldn’t help but wonder what else is on TV. We’ve seen this type of gross-out humor from tons of other sitcoms. Fans watch Sunny because it feels fresh, original, and has some really funny characters. Vomit humor is a waste of these beautifully crafted pillars of comedy.

The episode treads water for the duration of its time, riffing on Mac’s extreme obesity and using Roxy to fill space. Dee attempts to “clean Roxy up”, but to no avail, as they both end up snorting cocaine. Meanwhile, Dennis and Mac gorge themselves on some repulsive looking chimichangas and insulin needles. Mac’s obesity goof is funny in the teasers but only provides a few laughs throughout the actual show.

Perhaps the most troubling part of the season seven premiere was the excessive number of commercials. FX interrupted the show seemingly every seven minutes. It’s no wonder the writers could not get a good flow going.
At the end of a typically hilarious episode our heads are spinning from the mayhem. Last Thursday’s episode had viewers waiting for the episode to go somewhere. My viewing party was surprised and disappointed when the credits began rolling at 10:30, expecting an hour long premiere.

Don’t get me wrong, it was not an bad episode. Fans have just grown accustomed to more from Sunny. These are the same guys who brought us the Dayman after all.