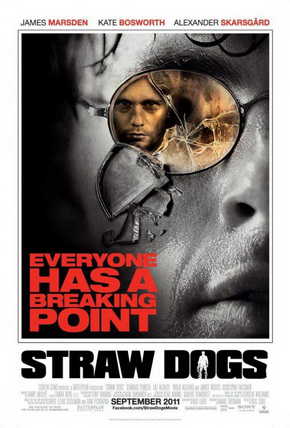 Straw Dogs, a remake of a film of the same name waters down the original for modern audiences but maintains a modicum of verisimilitude that is perhaps more salient, or at least more focused. Starring James Marsden, the Mississippi-set film does not pack as many punches or have as many complex themes as the original, but the ones it does explore are interesting. This remake is based on the 1971 original, which is based on the novel, The Siege of Trencher’s Farm.

The trailer for Straw Dogs is deceiving as it depicts the film as an action-packed horrorfest. As it turns out, Straw Dogs explores characters and their relationships for over an hour before any action picks up. When screenwriter David Sumner (Marsden) and his actress wife, Amy (Kate Bosworth), move to Amy’s hometown, personalities and ideologies clash as the city-slicker struggles to fit into the rustic community while Amy’s old flames and friendships are rekindled. Conveniently enough, the Sumner residence needs repairs, which a band of locals happily work on. This band of locals includes Amy’s old steady boyfriend from high school, Charlie (Alexander Skarsgård).

Charlie does almost everything he can, without being too obvious, to make the newcomer feel unwelcome. The differences between these two men and their ideas of what makes a man a man clash. Both men succeed in their own contexts as men with good lives and their contact challenges the audience to reconsider what defines masculinity. David pans Charlie and his kind as “straw dogs,” Chinese ceremonial forms with no substance which are cast away after their usefulness expires. Charlie is not as eloquent, but has some choice words pertaining to his thoughts concerning David.

Caught in the middle is Amy, Charlie’s ex-lover and David’s wife. Her character straddles the two (literally and figuratively), switching allegiances and mostly just being indecisive. She generally seems underdeveloped; at times she defies David and does what she thinks is best, while at other times she exemplifies the obedient wife. She yells at her husband for not standing up for himself, and yet she never stands up for him either.

In the original, Amy is more of a feminist (as was en vogue at the time) and wants to share the male gender role by doing traditionally male tasks like mechanical repair. However, in the remake, she tends to be satisfied with preaching a lot and going for barefoot bra-less jogs.

Overall, the remake is a watered down SparkNotes edition. The characters are not as ambiguously good and bad and the audience is led to ethical conclusions instead of deciding on their own what is right.

Perhaps the biggest downfall of the remake is its celebration of violence. Violence in the remake is either exactly justified or not; there is no gray area. The audience feels the exciting conclusion as revenge instead of a last resort. Charlie evilly attacks Amy. David is the hero and saves the day instead of being a broken man driven to the edge doing something he could/should have avoided, but really deep down did not want to. By the end, it’s just the bad guys getting their gory comeuppance. There is no complex emotional machinery driving these people, just clear “good” and “bad.”

Straw Dogs will please audiences as a revenge thriller, but not without investment. The movie clearly defines the good and bad guys without dexterity. It is a heavy-handed treatment of characters and events, but there is actually something underneath the studio gloss. However, it is mostly lost by the satisfying ending.

Really Straw Dogs (2011) is just a lighter version of the original  Straw Dogs (1971) movie, which may actually satisfy today’s audience.