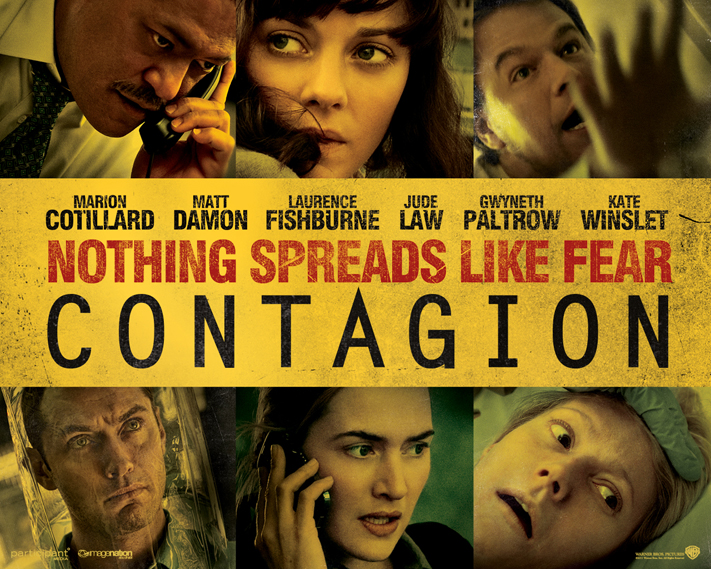 Steven Soderbergh’s Contagion is a science fiction thriller that dramatizes the worst nightmare of every germaphobe. The sudden outbreak of a deadly viral disease that is virtually unstoppable. It is scary because unlike apocalyptic films that feature zombies or aliens, a worldwide epidemic could happen.

Soderbergh clearly did his research; throughout the film we are given an inside look into how some of the world’s leading medical researchers would react to such a catastrophe. However, because he fails to truly develop any of the characters and focuses a little too much on the scientific aspects, this movie almost comes across as a boring documentary in some parts instead of a sci-fi thriller.

Like many of Soderbergh’s previous films, Contagion is packed with A-list stars. Matt Damon and Gwyneth Paltrow play Mitch and Beth Emhoff, a couple with some serious marital problems. It is Beth who initially contracts the disease while on a business trip in Hong Kong, unknowingly spreading the highly virulent disease to anyone and everyone around her. Soderbergh doesn’t waste any time with this disease, opening his film with a singular cough from Beth, followed by her rapid descent towards death marked by horrific seizures.

As the disease quickly spreads, we are introduced to members of the Center for Disease Control Dr. Ellis, Dr. Erin and Dr. Ally, played by Laurence Fishburne, Kate Winslet and Jennifer Ehle respectively. They don’t waste any time beginning to work on a cure, although it proves to be more difficult than they initially think.

The World Health Organization also gets involved, sending epidemiologist Dr. Leonora, played by Marion Cotillard, to Hong Kong to try to find out what caused this disease and how it spread.

Using video tapes from the casino where Beth contracted the disease, Dr. Leonora maps the spread of contagion from each now-deceased host to host, the transmission achieved through seemingly harmless acts such as passing a glass or blowing on dice.

Jude Law plays Alan Krumwiede, an overzealous internet blogger who is convinced that the government has a cure to the disease but is hiding it from the public because of a secret deal with pharmaceutical companies seeking to profit tremendously.

This film excels in its realistic portrayal of the characters, refusing to polarize any of them. The heroic medical researchers all have their flaws, just as expected from any real people. The fear-mongering blogger Krumwiede is similarly an authentic character, coming across as genuinely concerned for the people despite his questionable tactics.

However, the stories of the main characters are never fully developed, as the movie jumps from location to location. This creates the effect of chaos and urgency, but it also cheats the characters of valuable screen time that is important in order for the audience to become attached to them and actually care about their fate.

Soderbergh used a panel of real scientists when preparing for this film, and it shows. The movie is full of scientific terms and references that are quickly explained, however, most people usually attend movies for entertainment, not a science lesson. Additionally, the methodical way in which the story moves from research laboratory to research laboratory to military personnel becomes a bit documentary-like.

The actors all did a fairly commendable job with their limited screen time. As seen in the trailers, Paltrow doesn’t last long, but her performance is chilling and well-delivered. Damon does a decent job as her distraught husband, however, as the film progresses he turns into an overprotective dad whose sole concern is making sure his daughter has no contact with the outside world. Fishburne and Cotillard were both good in their scientific roles, although much was left to be desired in terms of their back stories.

Winslet did a very good job as the dedicated CDC scientist, although her role was comparably small; she shot all her scenes in only 10 days. Law also performed well as the fanatical internet blogger, even donning some fake crooked front teeth that added a lot to his character. His intensity was very real, and it really helped convey the desperation and anger people were feeling.

Overall, this movie is an interesting and realistic look into what would happen if such an epidemic were to ever break out. At times the scientific terms become a bit too much to bear, and the characters could have been more developed, but the realism of this film ultimately succeeds in adding a chilling effect that is sure to have the audience buying some hand-sanitizer.