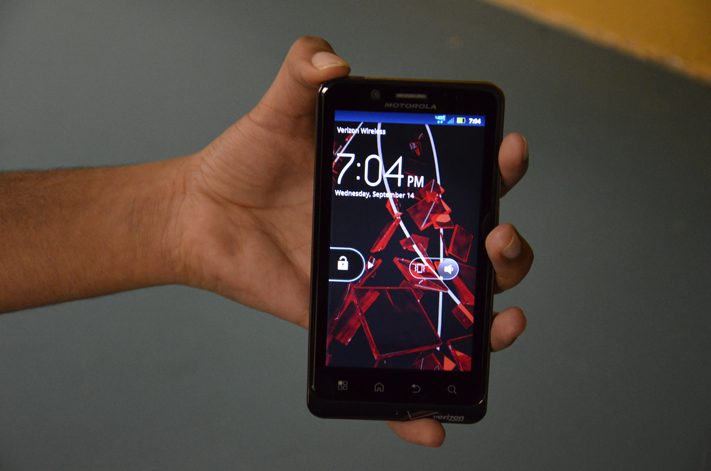 It’s been nine long months since the world has gotten the first glimpse at what Motorola and Verizon have called the future of mobile computing. Now, the long-awaited Droid Bionic has finally been released and it’s time to find out if the phone lives up to the hype it’s created over the past few months.

The Droid Bionic was supposed to be one of Verizon’s first 4G Long Term Evolution (LTE) phones, but unforeseen problems with the original design forced Motorola to scrap it and start over. The resulting device is sleeker and more robust looking.

On the front, the Bionic has the standard Android button layout, along with a 1.3-megapixel front-facing camera for video chat. The screen is a 4.3-inch quarter HD (qHD) display with a resolution of 960×540, the highest of any Android phone out on the market today. The screen is also PenTile matrix, which allows for a brighter display while using less power.

On the back, there is an eight-megapixel camera with a flash that’s capable of shooting full HD 1080p video. The pictures taken were crisp and colorful and the video taken was sharp and lifelike.

The design includes a dual-core Texas Instruments one GHz processor. It’s also got one GB of desktop-grade RAM and 16 GB of internal storage as well as an included 16 GB MicroSD card for even more storage.

The Bionic is running the latest version of Android, Gingerbread, along with Motorola’s custom BLUR user interface (UI). It has been severely modified from previous versions of Motorola’s BLUR UI. The look itself has been updated to a darker blue that feels much more polished.

Verizon’s network has always been stellar when it comes to service and reliability. The Bionic is no different in that respect. Calls were never dropped, signal never lost and call quality was superb.

What makes the Bionic stand out is also the fact that it runs on Verizon’s new 4G LTE network. One of most exciting features of this phone is Wi-Fi-like speeds from Verizon’s network. It’s definitely an impressive thing to experience in person.

The build quality, as with other Motorola phones, is exceptional. It feels very smooth and nice in the hand, and it’s not as heavy as one would think when they saw a phone of this size. Motorola has really paid attention to the attributes that make a phone easy to handle and the Bionic is a perfect example of this.

There are some issues that need to be addressed, though. The screen is a little big, so it could take some getting used to. Coming from something like an iPhone, it’s a huge leap. The screen also has a slight balance issue with green and blue. The colors in between the two, such as turquoise and teal, are poorly displayed.

The battery life is also a big issue for users of the phone. With switching between Wi-Fi and 4G throughout the day, the average seemed to be about eight to nine hours from when the phone comes off the charger until it shuts down to conserve power. Comparatively, this is excellent battery life for a 4G smartphone.

There are a couple software bugs, such as higher-than-normal cell network battery usage, but they should not affect normal usage and are bearable until Motorola issues an update within a month or so.

A final note is the price point. This phone is definitely expensive at $299 with a new two-year contract.