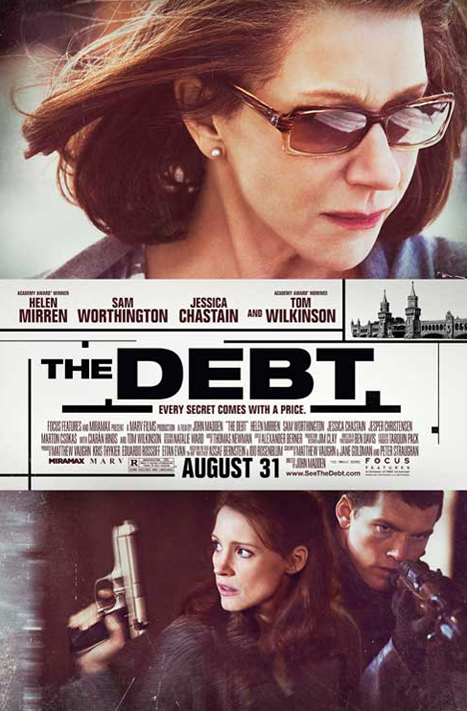 The years of the Jewish Holocaust are known all around the world as a time of horror and supreme inhumanity. There is no denying this.  The amount of lives brutally ripped apart by the Nazi cult numbered in the millions. The entire world witnessed the suffering of a nation, and John Madden’s new espionage film The Debt, which opened last Wednesday, reveals that in no way did the pain end with the winning of the war.

This film is played out in two parts, the first being in 1960s Germany. Jesper Christensen  (Mr. White from the most recent Jame’s Bond) plays the elderly Dieter Vogel, an ex-Nazi doctor whose inhumane experiments took the lives of thousands during the war.  Through the use of a pseudonym, Vogel has eluded imprisonment and is now living within the walls of Berlin. Sam Worthington of Avatar fame, newcomer Jessica Chastain and Marton Csokas play a group of Holocaust survivors bent on revenge and with the intent of kidnapping Vogel, smuggling him out of Germany, and putting him on trial for past crimes.  Relationships form and bonds are tested as they put into action their plan to capture the maniacal doctor.

The second part of The Debt, which takes place in the late 1990’s, finds the three now elderly protagonists dealing with the consequences of past actions.

The cast of this movie leaves little to be desired; though not necessarily made up of A-list stars, the actors’ work is most definitely worthy of commemoration.  Worthington’s portrayal of the passive-aggressive David is an exceptional one, sharply defining the definition of repressed pain and loss.  Csokas (Aeon Flux) adds a taste of danger to the film with his character of Stefan, the professional yet slightly unstable leader of the operation.  Chastain, who plays the tough yet fragile Rachel, is relatively new to the spotlight; nevertheless, she gives a dramatic performance worthy of her older counterpart, the Oscar-winning Helen Mirren.  With the role of the older Rachel, Mirren once again displays a natural talent for creating truly memorable characters. Mirren’s years of experience clearly show through her portrayal, providing The Debt with a certain credibility rarely found in today’s cinema.

As for the bad guy, Christensen portrays his character, the dreaded “Surgeon of Birkenau,” with an almost Hannibal-esque style of menace.  Practically stealing the show with nothing but the insane look in his eyes, the character of Vogel is not to be trifled with.  Not many old men laugh as they recall the horrors of their past crimes.

The Debt is not a summer blockbuster, nor is it the most frantically hyped movie of the year.  It is, however, worthy of praise for being an action film in the footsteps of the Bourne trilogy with an emotional level on par with Schindler’s List.

Rarely does a movie provide such a feast for thought, while completely harnessing the viewer’s attention throughout.  Well acted and ominously presented, The Debt illustrates a story of loss, revenge and the haunting consequences that follow.