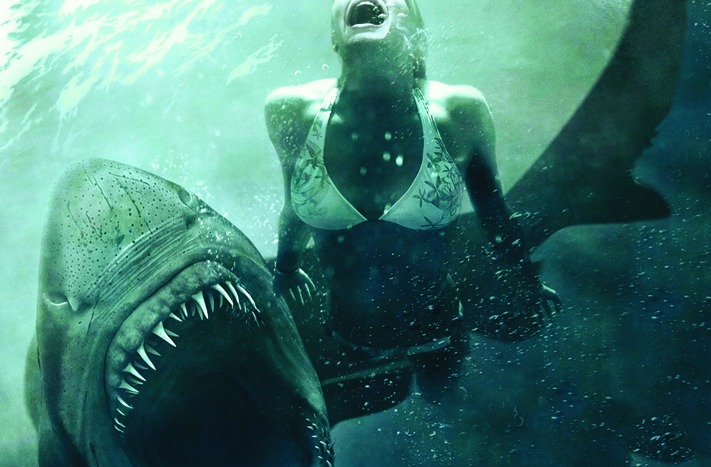 In theory, director David R. Ellis’ Shark Night 3D should serve as an appropriately campy conclusion to this summer’s line of box-office hits—with the Discovery Channel’s annual Shark Week come and gone, this shark-infused thriller makes promises of even grittier displays of violence, viscera and blood-red water in the spirit of Steven Spielberg’s Jaws. We are instead provided with an unpleasantly tacky concoction of shock and awe that scrapes for the title of “B-movie.”

The film follows the escapades of a garden-variety pack of college students who encounter an unusually vicious population of sharks inhabiting a freshwater lake. When their primary means of transportation is destroyed in an explosion as unbelievable as the film’s premise, the audience becomes witness to a struggle for survival between buxom blondes and unconvincing CGI hammerheads against a Louisianan Bayou backdrop.

While screenwriters Will Hayes and Jesse Studenberg make half-hearted attempts at constructing meaningful back-stories to accompany the principal characters, there seems to be a “let’s just get this over with” mentality that pervades the whole production: As soon as the filmmakers are finished rushing the characters out of Tulane University and into a high-end lake house, they immediately delve into the diluted, PG-13 shark attacks and almost humorous inter-character drama that consume what remains of the plot. Even the clownish architects of the attacks, who appear to have been plucked off the set of Deliverance, seem to lack passion in their work.

It is fairly evident that the cast and crew recognize the absurdity of the film; however, they fail to enjoy themselves in the process of making it. After an approximate hour of half-baked CGI and tasteless schadenfreude, the film takes on the tone of a joyless car trip to Sea World. Mechanical sharks are flung across the screen, half-witted villains are apathetically set aflame and the meaning of the film—if there was ever one to begin with—is lost in the murk of the lake. The 3-D effects breathe a bit of life into the underwater environment and otherwise lifeless sharks, but they contribute precious little to the above-water action and weak dialogue that comprise most of the film.

Ellis’ Shark Night ultimately comes off as an excuse to combine 3-D effects with attractive college students and bloodthirsty sharks, culminating in anticlimax and banal romance. The most it could amount to is a vessel for box-office dollars fueled by flocks of teens in search of something—anything—to do on a Friday night: offhandedly decide, “Okay, I guess. Shark Night it is.”