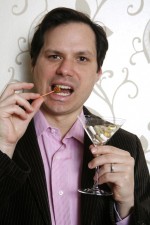 Picking out what is fiction and what is reality with Michael Ian Black can be difficult.

It’s a little like telling up from down—in outer space. One thing is for certain, though. Black will be appearing on Tech’s campus on Thursday, Sept. 8 at 8 p.m., performing the new act from his “Black is White” nation-wide tour.

Like most comics, Black draws most of his material from things going on in his life.

He admits that he had children only as a means for more standup material.

He also said that Tech students can expect to hear about “the time I became a panda bear.”

Students can still purchase tickets for $15, which Black was willing to bet cost less than Bill Cosby tickets when he comes to the Ferst Center later this semester.

Black’s standup career is still in its infancy. Even so, less than a month ago, Comedy Central aired Black’s one-hour stand-up special, “Very Famous,” just a few days before his fortieth birthday. His  album, with the same name, reached as high as number three on iTunes’ downloaded comedy charts.

Even with his newfound standup success, most students will distantly recognize Black from his humorous and biting commentary on VH1’s I Love the…(insert a decade here) Series.

Known for his sarcastic wit and keen societal observations on stage, Black has been a bit of comedy journeyman for the early part of his career.

He has at least dabbled in about every area of comedy that exists and has done his best to saturate any form of conventional or unconventional media market that will have him.

From children’s books to podcasts to movies to too short-lived television shows, Black has touched all of the comedic bases and then some.

The guy even has close to 1.7 million Twitter followers, where he is probably most famous for campaigning to be Taco Bell’s national spokesman.

It was an effort that ultimately failed, but left in its wake a series of tweets rife with hilarity.

He contends that he has not officially given up on his campaign, but its momentum has at least stalled.

However, if he had to issue his concession speech, this is what he says it would sound like.

“It’s been a great run. I think we really changed the conversation in this country for the better. We brought the issue of me being the Taco Bell spokesman to the forefront of everybody’s mind. It was a good fight. It was a long fight at times. It was a contentious fight, but the debate was always spirited and I never lost respect for my adversary. I wish Taco Bell all the success in the world moving forward…except for the chalupa, which I’ve never cared for,” Black said.

Black is also in the process of writing a book with Meghan McCain, daughter of U.S. Senator John McCain, tentatively titled America, You Sexy Bitch according to Black.

Black is claiming responsibility for that one, too.